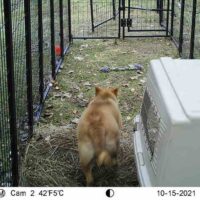 Queen of Shiba is a Shiba Inu that had been loose since April, 2021. Someone had seen her “dumped off” from a car back in early April, 2021. The mechanics and neighbors near the trap site also reported that Shiba had been in the area since April. She had evaded all attempts to trap by individuals and Animal Control.

A dog will “turn feral” within days of being released, lost, dumped, discarded, etc. This is the plight of so many. Shiba had an amazing group of supporters that came together from near and far to get her to safety before the Wisconsin winter. It is important to remember in feral dog recovery that many people on the ground is NOT always good. There were many people with Shiba’s best interest at heart but feral dogs need time, space and very limited exposure to people. Fortunately, we were able to channel all the positive energy from Team Shiba and let a few people be the “boots on Shiba’s ground”. Thank you Team Shiba for never giving up and trusting us to bring her to safety. 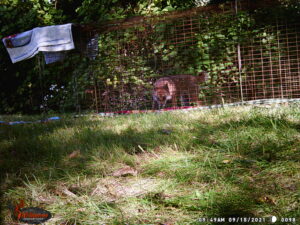 Shiba was very embedded in a relatively active/industrial area and many people saw her multiple times a day. So we knew she had a routine, we just needed to learn her routine and work with it. 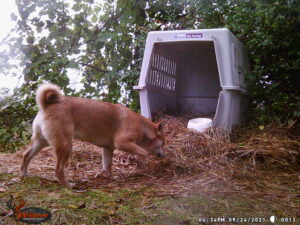 After doing some research on the breed, Shibas are REALLY difficult to trap. They are independent and skittish, Shiba was very typical of the breed. We determined that we needed to remove the box trap and acclimate Shiba to something totally different. We removed the box trap and added a crate and hay.  We started feeding in front of the crate. After a few days when Shiba was comfortable eating near the crate, we started adding dog kennel panels. The dog kennel panels will eventually become a “Missy Trap”.

What did We Learn

Over the next 4 weeks, we began to build a Missy Trap, one set of panels at a time. No this is not a BIG dog, that does NOT mean the dog doesn’t NEED a big kennel/Missy Trap. 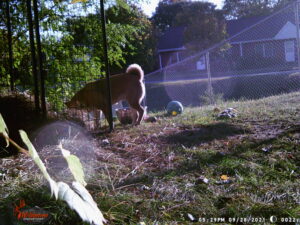 This is a skittish dog that you can’t trick or fool. Shiba taught us A LOT:

Shiba did this and MORE….

Visitors to the Trap Site 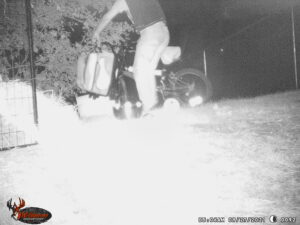 We unfortunately had SEVERAL visitors to the trapping site. No matter how hard you try, people with the best of intentions and people just stumble upon the site. Dogs on the loose generally turn “feral” within ONE WEEK of being on their own. That means they don’t respond but run from their name and any attempt to capture them. Shiba Inu as a breed is already known as an independent breed, strangers on the site were driving her away. Unfortunately the site she choose and we acknowledged could be high in traffic and was frequented by homeless. We can’t control people so we have to watch and adjust.

Wildlife at the Trap Site 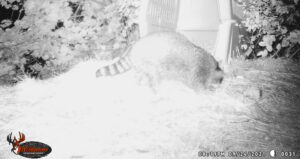 MULTIPLE raccoons visiting and eating Shiba’s food. We were able to arrange for a Daylight Only feeding schedule due to the location and volunteers. Shiba was feed early in the morning, mid-day and the bowls were picked up at or before sunset. After a few weeks of this routine, we were able to rid the trap site of raccoons. 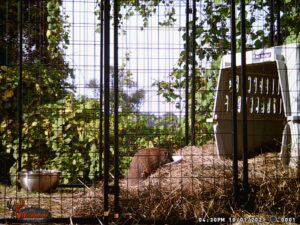 Woody the Woodchuck was a different story! Woody ate during daylight hours and after several sightings we were able to determine Woody’s multiple holes and we opted to FEED Woody at a hole opening about 50′ from the trap site. We tossed Woody the same food we were feeding Shiba, just at his spot AND we added Woody favorites, lettuce, carrots and chicken. Home runs were when we tossed food over the fence to Woody’s hole and it went in the hole!!! Breakfast in Bed for Woody!!!

Shiba had an amazing support group! She was fortunate that many of the neighbors were invested in her plight. The most important was the resident who saw her in April and then noticed she was still around in September and started feeding her.

Second was the neighbor who had front window view of her favorite spot, soon to be trapping site. This neighbor provided great information and amazing generosity in supporting her capture.

Third Shiba was in an area that was residential and industrial. The employees of the neighboring business knew of her presence and provided amazing insight into her daily activities and honestly they were her best friends. They provided us with AMAZING insight, ideas and support.

Assess your Time and How Important it is

We had so many people pushing us to move more quickly. However we objectively assessed the situation for risk factors and determined the following”

We determined we had 4-8 weeks to successfully capture her.

We reached out to local Animal Control to let them know what we were doing. It is SO IMPORTANT to work with and keep local authorities in the loop. Animal Control had tried several times to capture the dog and had not been successful. They were aware that we were working on it and we kept them updated on our major progress points.

Let the DOG Set your Schedule

Everyone wanted our timeframe and schedule. Our consistent response was “The dog tells us”.

The dog HAS to set the schedule. We had 3-5 cameras set up in various locations for 3-4 weeks to watch and gauge her acceptance and pace. We watched what she liked and what we did that she told us NO WAY. We worked with her. She set the pace and we didn’t move until SHE was ready for the next step. That means any change to the site. We made changes in SMALL increments and watched what she did. If she didn’t show up or react as we expected we watched the photos. We found people that intruded and disrupted her. We had Oktoberfest which didn’t seem like it would matter to her but the additional traffic and commotion in the area at large did impact her behavior. Wind and rain impacted her behavior. Duck season and gunfire impacted her behavior. Weird people that were either drunk or on drugs impacted her behavior.

Dogs that survive on the loose do so because they are observant and they react/bed down when things change ever so slightly. RESPECT that. KNOW that. And ADJUST.

We were fortunate that this trap was located in town and had amazing neighbors that allowed us to connect a video camera to their WiFi. This camera was HUGE in helping us adjust our plan according to the dog’s body language and actions. Each video from the on site camera has a description of what we did and what we saw either before or during the video. There are about 40 videos of varying length but it is an extremely interesting journal of the last two weeks at the trap site.

Click on “CC” or “Watch on YouTube” to see the closed captioning descriptions and explanations on each video.

Photos of the Capture and Securing Shiba

The photos in this slider are from all 4 trail cameras around the trap. The times on the cameras were not totally synchronized but the sequence of photos is correct. These were photos taken based on movement so angles are not perfect but it is again a great learning tool to see what we did well and what we can improve upon for the next time.

Brainstorm the WORST case scenario! What can go wrong? How do we make sure if that happens we don’t lose!!!

You have ONE chance. You CANNOT screw it up! Make sure you think of every possible wrong and how you can mitigate it! 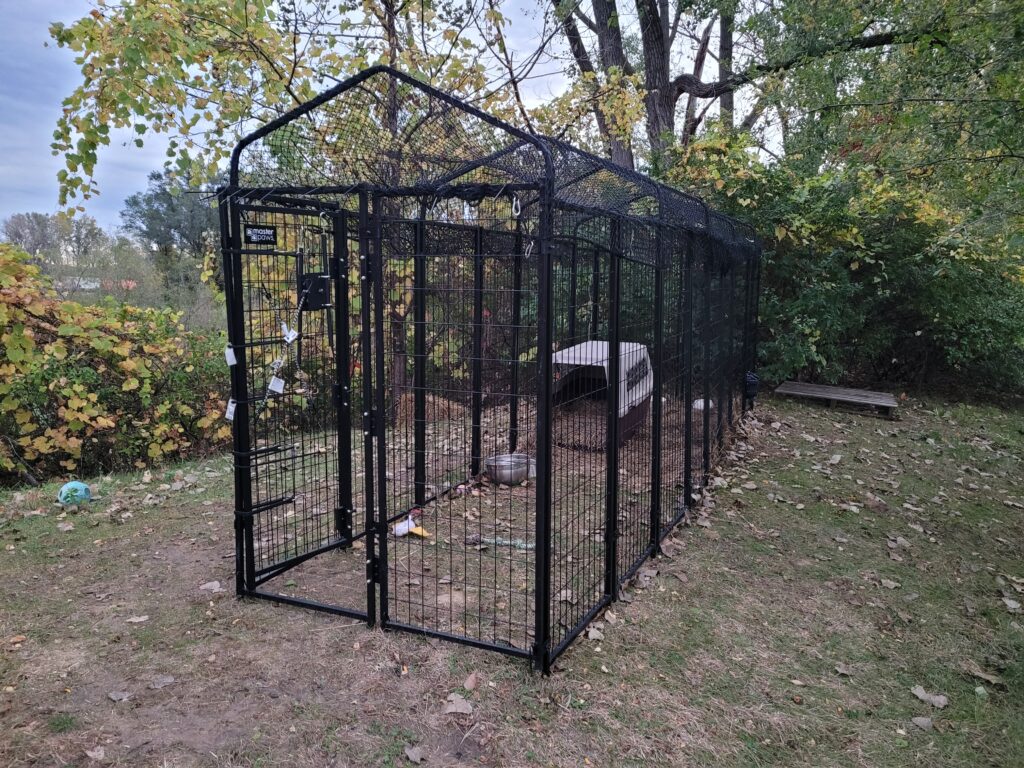 The Final Shiba Trap – Ready, Armed and Waiting for the Queen of Shiba to arrive!

The actual trapping video. If you don’t want to go through the video journey with us. Here is what everyone wants to see. SHE IS SAFE!!!!

Fearful Dogs – Methods for Dealing with them
Lost Dog? First Steps You Should Take to Find your Lost Dog