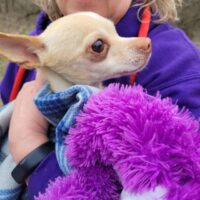 On April 29th, 2022 around 1:45pm, Peanut, the tan Chihuahua, got scared and slipped out of his collar by Copeland Park in La Crosse. Peanut and his Dad were in town for a family funeral. Peanut was staying with a friend while Dad went to the funeral. The friends attempted to follow Peanut but they lost track of him around the La Crosse Train Station.

Peanut was unfamiliar with the town and had no familiar place to return to, he ran and ran. We began tracking him on Sunday and found a few key clues:

As with every lost dog case, we recommend and follow the same steps:

This case had the added twist that many cases have of the dog and owner not being familiar with or from the area. This makes it even more difficult to predict the dog’s possible locations and patterns. However in this case the owner provided us with a lot of insight into Peanut’s routine. Peanut is the co-pilot in a long haul semi so he is used to truck stops, big equipment and lots of noise. This is why it is not surprising that he likes hanging out near the train depot and industrial park which are where many of our sightings were for several days. Sightings are the purple markers in the map below.

Typically we use a combination of phoned in sightings which we use to set up feeding stations with cameras. We set up 7 different feeding stations with either a cellular or SD camera. These were ALL a total FAIL with Peanut. Peanut NEVER returned to a sighting location with the exception of Gould and Caledonia Streets which we received a call indicating he was seen there on Wed and Thu morning. The caller thought he lived in one of the homes because he was pacing up and down the road so he hadn’t thought too much about it until he saw one of our road signs this morning (Fri 4/29, day of retrieval).

Most of our sightings were able to be confirmed but we were ALWAYS an hour or more behind Peanut and he rarely retraced his steps that we could detect. This little dog was truly giving us a workout.

We were confident he would eventually fall into a pattern or find an area where he would bed down and set up a routine. In our experience this typically happens after 3-4 days. We were at Day 7 and still not finding a pattern except he was always around the RR tracks. Fortunately the RR workers in this area are SUPER and they were constantly seeing us, asking what we were looking for and willing to take our phone numbers to call. In addition they were sharing the information with colleagues. We also had many of the businesses located near the RR tracks and those with Semis that were posting and sharing information. Unfortunately this little tan pup less than 10lbs was not easy to spot.

The La Crosse community was “All In” they were constantly looking and searching and willing to do so. This can be very scary for Lost Dog trackers as we align with beliefs that are counter-intuitive. Do NOT CALL for a dog. A human’s basic instinct is to CALL for a Dog. However, when a dog is lost and running scared, they VERY quickly go into SURVIVAL MODE. The simple act of calling for a dog can cause them to flee and move on to quieter/safer areas. Dogs also have HUGE personal space zones normally (6-10’) and those can increase by 2 to 3 times when a dog is in Survival Mode.

Social Media can be AWESOME but it can also bring unwanted attention and traffic to a very fragile situation. This is such a hard and delicate balance of what and how much information to share. We often come across as harsh and unresponsive when in fact we were responding in what we feel is a calculated and thoughtful manner taking in the “big picture” which is our Google Custom Map. The map tracks each sighting and all information associated and we look for patterns and feasibility based on the dog’s size, prior behaviors, history, terrain and any other factors we feel are relevant.

Peanut displayed No predictability except the RR tracks. Every day we honestly threw out several options and decided what we thought made sense. It was a frustrating, exhausting and emotional roller coaster. Peanut was pretty UnPredictable!

Junior, the owner, messaged us Friday morning and said he had a dream that “Today is the Day!”.

The search team had been out following a solid timely sighting around 9pm the night before but had various reports about where Peanut went. We knew Peanut was on Hwy 16 around La Crosse Memorials and in the street but it was dark, he is small and there is a LOT of traffic. Several different reports were received about where he crossed and headed towards the bluffs. The searchers spent about an hour wandering around in the dark looking for signs and placing out food and family scented items.

The search team hit the trails shortly after sunrise Friday morning and scouted the areas looking. We knew Peanut loves other dogs so we had dogs with us to aid in luring him out as we felt/hoped he was hunkered down somewhere in the area between Bluff Pass and Forest Hills. After an hour and half of searching and setting up feeding stations, we departed and waited to see if we saw anything. We had noted a few desired feeding stations but would need permission so we started that process.

Around 2:15pm Friday, we received a call that 2 ladies walking through the woods between Forest Hills and the Boy Scout office had eyes on Peanut curled up in some leaves on a log pile in the creek bed. We had been on the same trail earlier in the morning and either didn’t see him or he wasn’t there at that time. We suspect he was there but due to the angle and direction we approached, we did not see him. Peanut could have been so exhausted, he did not react to us or the dog we had along. The dog we had along was probably focused on a squirrel and never noticed the small dog 10 ft away curled on a log jam in a creek bed.

These photos were taken Post Retrieval. We did not think about photos upon sighting. We needed to secure the dog.

Regardless, these ladies have Eagle Eyes!!! When they spotted Peanut, they did exactly the right thing and stayed close enough to observe Peanut and called the owner. The owner had them call us and they explained in detail their location.

We immediately moved into action. One of the ladies met our first responder in the lot and took them to the location. We discussed several options and approaches, reviewed the escape routes and how we were going to attempt the retrieval. The approach was blind so the spotter had to not only keep an eye on the dog but also direct the retrieval person by hand signals down the embankment. The process seemed to take FOREVER but at about 6’ the retrieval volunteer gained visual of the pup. Moving in low and slow carrying one of Peanut’s favorite toys and blanket which had been stored in sealed plastic bags to retain scent and minimize contamination; the retriever was able to slide into the creek and retrieve Peanut from his leafy log bed.

Poor Peanut was exhausted. We firmly believe the presence of Peanut’s favorite toy and blanket were key factors in successfully rescuing him by hand.

You can see Peanut wrapped in both his toy and blanket in the photo below being held by one of the responders. This photo was sent to Junior, owner, to confirm that the dog we had was in fact Peanut. It was!!!!.