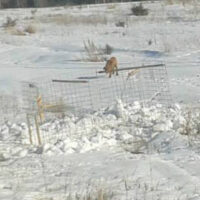 What a story this boy could tell! Yukon (AKA Winter, the name given to him by his rescuer, Greg) was a stray in a rural area north of Minneapolis, MN. The first reported sighting of him was in Sept. 2013. This pup survived one of the coldest, harshest winters in years. Several people in the area were feeding him but no one could get near him. On Saturday, March 22, 2014 Greg, a volunteer from The Retrievers, set a live trap and within several hours Yukon was trapped. The Retrievers (www.theretrievers.org) is an all breed, non-profit search and rescue team in Minnesota. Yukon spent the night with Greg at his home, I picked him up Sunday morning. He is a very sweet and loving dog. Yukon has some fears and he is a runner, NOT a fighter! He is great in my 6’ fenced backyard, but when we go for a walk he becomes nervous, barky and wants to run in any direction he can. I have determined he has leash anxiety. He also has a high prey drive and wants to chase critters like deer, rabbits, birds and squirrels. He LOVES retrieving, water and especially water retrieves! He has very good house manners and house trained. He loves playing with dogs but is very submissive. Yukon is not ready for adoption. HIs leash anxiety and fear issues need to be worked on to see if he can overcome them. Here is a link to Yukon’s story on The Retrievers web site. https://theretrievers.org/yukon/