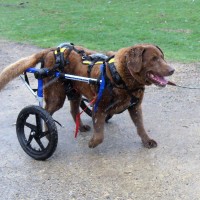 As originally published in “The Misadventures of Lula – Rescue Chessie (http://lularescuechessie.wordpress.com/) 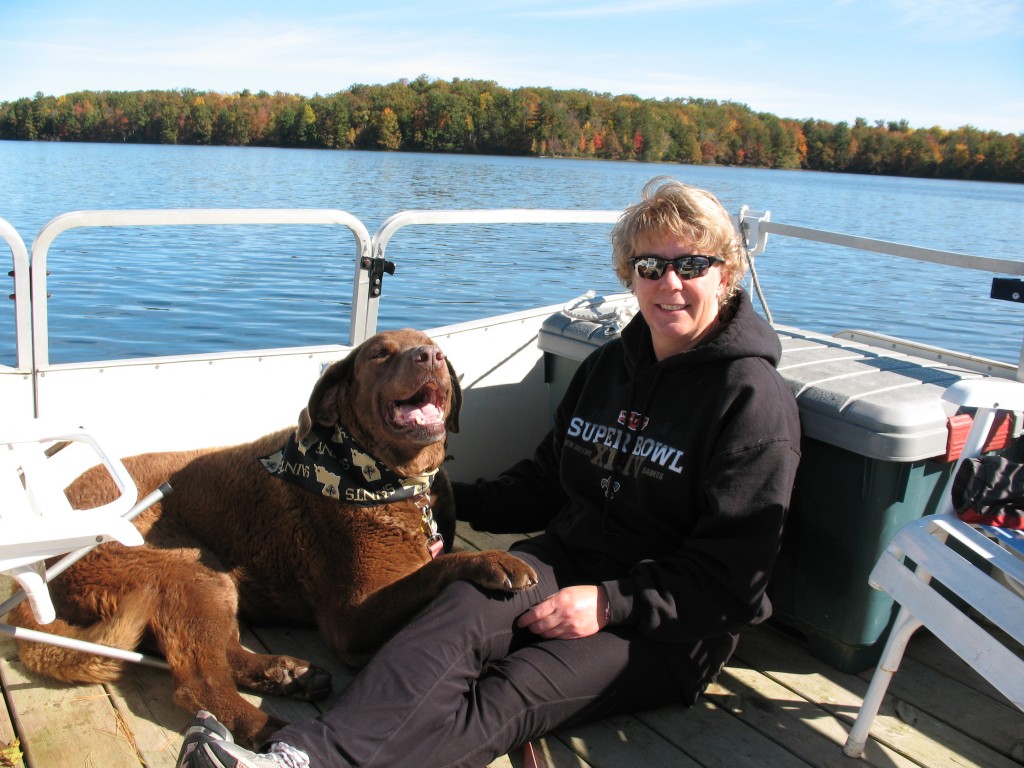 Pam and Lula enjoying a cruise on Pine Lake.

August, 2009 – My story starts somewhere near Duluth, MN where the workers of a recycling center found me tied to their gate on a Monday morning in August of 2009. No one knows how long I was there or how I got there, everyone has their theories. From there I bounced around a few shelters where I was called “Tiny” and thought to be overweight. No one seemed to want me and then the Chesapeake Rescue of Wisconsin found out about me and rescued me.

Lula upon arrival in La Crosse

Lula upon arrival in La Crosse

My first CRROW friend was Meredith, she picked me up from the shelter and took me to the vet and home for the night where I commandeered her pool table as my bed. I preferred inside the dryer but she wouldn’t let me stay there! The next day Meredith drove me to Minneapolis where my foster mom, Pam, picked me and drove me to La Crosse. And that is where my stories begin…..

January 2011 – It has been an exciting week. Monday, Pam found out a little about my past life. Meredith, the CRROW volunteer who rescued me from the shelter near Duluth, met a lady who used to be my neighbor. Well I guess Walter’s neighbor. Walter was my dad. The neighbor lady happened to talk to Meredith because she saw a big, brown dog in Meredith car and asked her where she got that dog. Meredith told her and after a few minutes, Meredith figured out the lady thought her dog was me! We do resemble each other but Meredith’s dog is a male Chessie.

Anyway the lady said I was Walter’s prized possession and we spent all day, every day together. Walter was a loner (otherwise known as a hermit) and every day we walked for miles and hunted. Walter would sometimes go to town and bring me back dog food but no big shopping trips like Pam sometimes does! Walter liked to live off the land and the only food he bought at the store was for ME! Walter had a pickup truck – I LOVE pickup trucks!!! To this day every time I see a pickup truck I get excited, bark at it and hope that maybe Walter is driving and will see me. Unfortunately I know Walter isn’t driving it because Walter died one winter when we were outside. I stayed with him waiting for him to get up and do something, but he never did. After a really long time, some strange people came in uniforms and wanted to touch Walter. I didn’t like that so I barked and guarded Walter. The uniforms got impatient with me and fired their guns up into the air. The nice neighbor lady said, that was the last they saw of me as I took off running for the woods. She put food out for me but I never came back.

The neighbor said Walter had been dead for quite some time out in the snow, so I had been on my own for a while already. She was REALLY happy to hear that I had been found and was being taken care of because she is a massage therapist and she used to come over and massage my sore hips. See my hips have been a problem for a very, very long time.

Now no one knows how long I was fending for myself – could have been weeks, months or a year. The next time “sighting” Pam has on me is when I was found tied to the “recycling” kennel outside the shelter in a small town north of Duluth in August of 2009. After a few shelters, I came to live with Pam in November, 2009.

So Pam and Sue say finding out a little about my history with Walter and my loss of Walter explain a lot about my distant and independent nature. In addition, they are pretty sure I learned my “bear-like” scavenging when I was alone after Walter died. Pam thinks I probably learned how to open refrigerators when I was “up nort” since many people have outdoor or garage fridges. Plus I eat anything and everything I see along the road, doesn’t matter how stinky or flat it is!!! and I hardly ever get sick! I can rip into a bag of garbage in record time and you wouldn’t believe how agile and strong my back legs are when food is involved!

Pam and Sue did a lot of research and phone calling trying to find out about Walter and more of my past. In the process, Pam contacted the Duluth Tribune to see if they might have any records on Walter and his death – since it was rather unique (well at least we hope that people die and go undiscovered very often). She talked with a nice reporter who was intrigued by my story – both my spotty past and my recent antics. He wrote a nice story about me and while we didn’t find out anything about Walter, we did find a dog that could only be my brother, Fatty Pie!

Fatty Pie was also an abandoned dog in the same area. He was found hanging out at a gas station and when he almost died that summer in the heat and because he was so overweight, he found his rescue angel and forever home as well. Fatty and I communicate but have never met. He still lives up north, near Duluth and is a stealthy 95 pounder!

So that is my story and I am sticking to it….