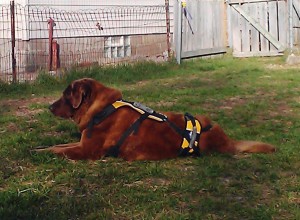 Lula relaxing in the backyard on what would be her last Thanksgiving. Thanksgiving was always Lula’s favorite holiday, a story for another day..

Older dogs and dogs that have to take lots of medications can struggle with what I call BBD – Bad Belly Day. Lula was on so many medications that she often had bouts of nausea and diarrhea. Some days she just did not want to eat. One of my neighbors suggested 100% pumpkin. She had heard it from a friend so I decided to do a little research and try it. Research indicated pumpkin is good for constipation and diarrhea!

Lula took daily medications for her hips, her hocks and incontinence. She was also sensitive to corn and wheat. So she would frequently develop diarrhea for 1-2 days. During those bouts, I would feed her rice and chicken broth. She would often go completely off all food for days with the diarrhea. The first time I tried the pumpkin, she had been off all food for days so I gaveher some rice mixed with pumpkin. She ate it all and within 24 hours she was all better. 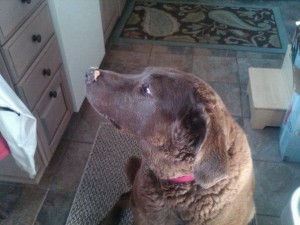 Lula’s table manners were not very good when it came to pumpkin! She often wore it on her nose until she wiped it on someone or the wall!

We began the regime of a spoonful of pumpkin a day and found that her BBD’s became less frequent and Lula LOVED her pumpkin. I know use pumpkin with many of my dogs. Louie and Radar both get pumpkin to keep their poop more solid. I do not give it to them every day like Lula but as soon as I see some loose stool, I pull out the pumpkin. I normally give the dog with the problem a few days of about 2 tablespoons of pumpkin and then go to one tablespoon a day to each dog until the can is empty.

Make sure you get the canned 100% Pumpkin NOT Pumpkin Pie Filling (it has all sorts of spices and stuff in it) If you aren’t sure, read the ingredients it should just list Pumpkin. I stock up when it is on sale, usually can get good deals around Thanksgiving and the holidays.

Learning to Play Fetch When you are a Blind Dog
Bringing Home a New Dog (Puppy) – What do I do now?