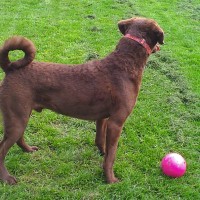 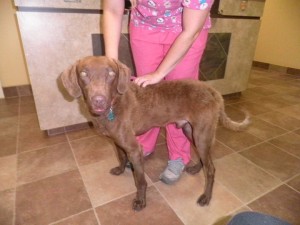 Louisiana Louie wandered onto a farm in Crowley, Louisiana in July of 2011. He was fortunate he wandered onto the right farm and the owner of the farm, Faye, captured him and started feeding the very skinny Chessie. Lucky for Louie, Faye got him to the vet and also contacted a pet rescue in Louisiana who got in touch with the Chessie Rescue. Through contacts that started in North Carolina and Wisconsin, Louie found his way into the hearts of hundreds of Chessie and dog people across the country and through a coordinated effort on Facebook and with rescues everywhere, we were able to transport Louie from Crowley, LA to Appleton, WI in one weekend! 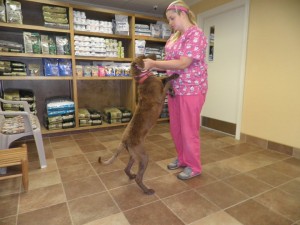 Louie loves people – once he gets to know them.

Louie is a small, young, neutered male Chessie who was Heartworm positive. His Heartworm treatment included the monthly HW pill. and a 3-week cycle of doxycycline. He will get the pills all year long rather than just summer months. Louie needed to gain a few pounds yet-he was so very active it was hard to  fattened him up! His coat started improving with good food-it was like straw from being outside and starving. We don’t know his age for sure-but he still has a LOT of puppy in him – energy, chewing, and all the things pups do. He appeared to be about 1.5-2 years when rescued. 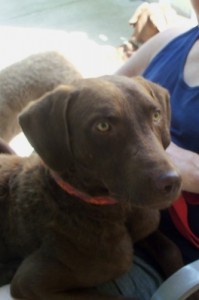 Now that he is gaining weight and getting good nutrition, his eyes are not so bulging.

As we spent more time with Louie, we discovered there was more going on than just lack of training and puppyhood. Louie would run frantically from window to door in the house. When outside, Louie would run the fence line, chase birds, dig and hunt for mice and always had a “wild-eye”. We began to notice a fear of people, territorial issues, sound sensitivities to loud and high pitches and several other stimuli would cause him to jump, scream and want to run away.

Disabled – My name is Lula
Chesapeake Retriever Rescue of WI