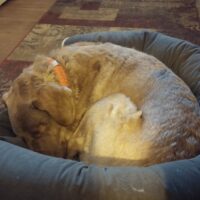 The first seizure was at 11:38pm. We were sleeping and I woke up to the seizure. It was not a horrible seizure and lasted less than a minute. His recovery was almost immediate. He went in the bathroom, got a drink of water and then we all went back to sleep.

5:08am, Radar had a second seizure. This one was again less than a minute and he recovered very quickly. We did not have school that day as it had been cancelled due to the predicted bad weather – snowstorm.

I had to go to work for a conference call so I dropped Radar at daycare. He did great there with no seizure activity and I picked him up at 11am. We came home and I was working on my computer. Radar was asleep behind my chair and had another seizure at 12:30ish. It was worse than the first two so I texted the vet. I asked if I should give valium to prevent another one. When I got the message it was close to 4pm and I gave him valium.

4:21pm on Feb 2 Radar had his fourth seizure. It was the worse of the cluster. It lasted about a minute and he really struggled with the recovery. He then had some seizure related activity at 6:30pm.

This is a video of the seizure activity I was seeing Wednesday evening.

I gave valium again at 10pm, 2am and 7am. I noticed some very slight wobbling and raspy breathing at 8am on Feb 3. I took him to daycare as I had to go to work. They did not notice any seizure activity and gave him his last dose of valium at noon. I picked Radar up at 3pm and he was okay but druggy. Radar does not function well on valium as he is unable to navigate.

I did not see any more seizure activity Wednesday (Feb 3).

Thursday (Feb 4)
Radar seemed pretty normal. I decided he was recovered enough to go to obedience class with me and Rhonda took it easy with him but he did great. Towards the end of the evening, he began to appear very tired and laid down while I was working with another dog. I did not find this odd because I know seizures wear him out. He happily slept next to Jaime as I worked with August in her kennel.

We came home around 8:30pm. Radar curled up in his bed and slept. We went to bed around 9pm and instead of getting in bed with me, Radar slept on his bed on the floor – very odd. Around 11:30 Radar was very restless so I thought he needed to go outside. We went out and he did not pee but he did wander into the snow. I had a hard time getting him to come back to me and inside.

1:30am – Radar again was restless so I decided to take him out again. We barely got downstairs and he started throwing up. He vomited up all of his dinner and was very lethargic. I took him upstairs, he drank a little water and we went back to bed.

3:30am – I heard Radar vomiting again. There was phlegm vomit all over the hallway. After cleaning that up, he drank a little and we went back to bed.

7:30am He slept on the bed until I made him get up at 7:30am. He refused food and was very distant and did not even care if he was near me (very unusual).

I called the vet at 8am detailing what I was seeing. I went to the store to get a thermometer. His temp was 37.3 degrees C. (about 99 degrees F) being a little low was concerning so we went in.

Vet ran a complete blood panel and 4DX. CBC came back excellent. 4DX came back with a strong positive for anaplasmosis. Radar was immediately started on a 30-day course of Doxycycline. Three hours after the first dose, he was already starting to act more normal.

Some interesting research on how the seizures and anaplasmosis may be related:

“The most frequently observed clinical findings in dogs that would alert you to A. phagocytophilum infection are joint pain and lameness resulting from polyarthritis. Other less commonly observed clinical signs include gastrointestinal problems such as vomiting, diarrhea, or both or respiratory signs such as coughing and labored breathing. Central nervous system disease (meningitis) can also occur, resulting in seizure activity, ataxia, or neurologic manifestations such as dullness or stupor, but these findings are infrequently observed.

Because many animals present with clinical signs of polyarthritis and possibly a history of tick exposure, clinical signs of canine anaplasmosis may be indistinguishable from those seen with Lyme disease. In addition, both diseases are transmitted by the same tick vectors and have similar geographic distributions.”
Source: “An update on anaplasmosis in dogs” Apr 01, 2008 By A. Rick Alleman, DVM, PhD, DABVP, DACVP, Heather L. Wamsley, DVM, DACVP
http://veterinarymedicine.dvm360.com/update-anaplasmosis-dogs?id=&sk=&date=&%0A%09%09%09&pageID=2